Ballroom Dance Latin Dance Swing Dance About Us Endorsements Gallery Contact
East Coast Swing has a 6 count basic step. This is in contrast to the meter of most swing music, which has a 4 count basic rhythm. In practice, however, the 6-count moves of the East Coast swing are often combined with 8-count moves.Because East Coast uses a six step pattern with music employing 4 beats per measure, three measures of music are required to complete two sets of steps.

West Coast Swing can be danced to almost any music written in 4/4 time at speeds ranging from very slow to very fast; 15 to 45 Measures per Minute, ideally at 32 Measures per Minute. The character of the dance changes over that range. At the slowest speeds the dance tends to exhibit a highly elastic connection with the possibility of very sexy, "slinky" walks for the lady, and a slight backward leaning poise at the full extent of the connection. At faster speeds the partners become more upright and the connection shortens with more of a "push and pull" feel and look.

Jive and East Coast Swing share many figures, as well as the same music style and tempo. The basic look and feel of Jive is lots and lots of energy, with the legs portraying a pumping action. Both the East Coast Swing and basic Jive consist of two triple steps and a rock step. The Jive differs in that the count begins with the rock step, which is counted "1,2. The two triple steps are counted "3 and 4" and "5 and 6. 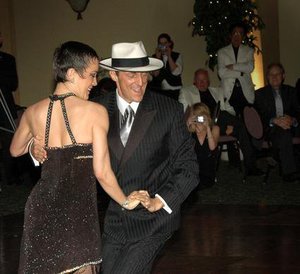