Ballroom Dance Latin Dance Swing Dance About Us Endorsements Gallery Contact
Cha-cha-cha’s flirtatious and teasing tone with a very Latin sexy playfulness makes this dance a favorite among dancers around the world. The Cha-Cha emphasizes hip action and rhythm expressed throughout the body. With its spicy personality and high-energy moves, the Cha-Cha can be danced to many styles of music including rock, disco, electronic and techno. This dance is a must when learning to dance.

The cha-cha-cha, or simply cha-cha, is a dance of Cuban origin. It is danced to the music of the same name introduced by Cuban composer and violinist Enrique Jorrín in the early 1950s. This rhythm was developed from the danzón-mambo, similar to the mambo,that follows a rhythmic pattern based upon a quick three-stepmovement. In general, steps are kept compact and the dance is danced generally without any rise and fall. The modern ballroom technique of Cha-cha-cha (and other ballroom dances) does undergo gradual evolution, particularly in competition dancing, but in essence is still firmly based on its Cuban origin in the 1950s.

The Rumba is a ballroom dance of Cuban origin in 2⁄4 or 4⁄4 time with a basic pattern of step-close-step and marked by a delayed transfer of weight and pronounced hip movements. It is a slower dance of about 120 beats per minute. Because of its slower pace, this is the dance most beginners start their dance foundation on.  Known for its beautiful melodies and strong choreography, the Rumba is a sensual dance performed to rhythmic, sensuous music.  It is known throughout the world as the “Dance of Love.” The rolling action of the hips gives Rumba a sensual presentation and heated display of emotion. Truly embodying passion and mystery, the Rumba is an irresistible routine you’ll want to take onto the dance floor time and time again.

Some say the Salsa/Mambo is a flirtacios and sensual dance.The Mambo uses a 4/4 beat and is similar in rhythm to the slower Bolero. The basic Mambo combination is counted as "quick-quick-slow," with the foot moving on the second beat. On the third beat, the weight shifts to the other foot, returning to the original foot on the fourth beat. Dancers swing their hips through each step, creating a fluid motion and a sensuous atmosphere.

In the Samba, the basic movement involves a straight body and a bending of one knee at a time. The feet move very slightly - only a few inches at a time. The rhythm is 2/4, with 3 steps per measure. It can be described calling it and-a-one, and-a-two, then back to one. The basic movement is the same to either side, where one foot moves to the outside lifting up just before the first beat (i.e. the right leg moves slightly to the right) and leg is kept as straight as a pole. The other foot moves slightly towards the front, and closer to the first foot. The second leg bends lightly at the knee so that the left side of the hip lowers and the right side appears to move higher. The weight is shifted to this inside foot briefly for the next then shifted back to the outside foot on the "two", and the same series of actions is repeated towards the other side. The dance simply follows the beat of the music and can go from average pace to very fast.

One of the most dramatic of all the Latin dances , the Paso Doble is a progressive dance. In the Paso Doble, dancers take strong steps forward with the heels, and incorporate artistic hand movements. The forward steps, or walks, should be strong and proud. The man should also incorporate apel, a move in which he strongly stamps his foot, much like a matador strikes the ground in order to capture the attention of the bull. All moves of the Paso Doble should be sharp and quick, with the chest and head held high to represent arogance and dignity. 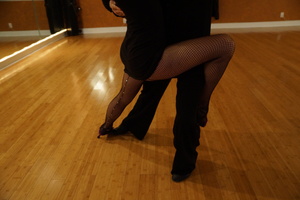 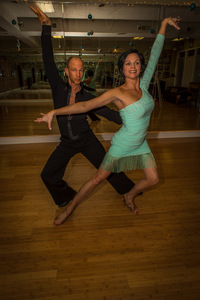 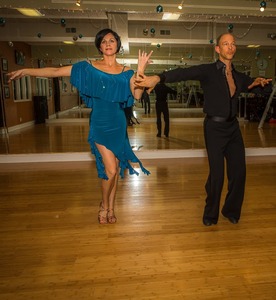